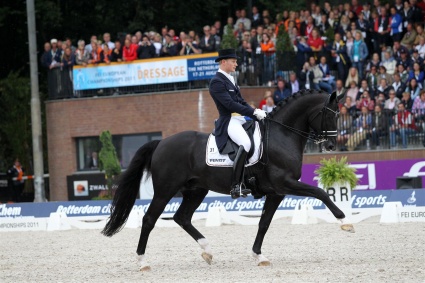 After seeing the tests of Totilas and Matthias Rath at the European Dressage  Championships, one question remained for me: what went wrong?

I have photographed Totilas with Matthias twice at home now. The first time at Schockemöhles place in March this year. It was great to see him again, but in the riding there were some obvious communications issues. Totilas stood in a rather dark stable, and that was not the surroundings you would expect for the most expensive and best dressage horse in the world.

The second time was last May in Kronberg at home with the Linsenhoff/ Rath family. The place is fantastic, and Totilas’ stable was beautiful. Totilas looked great in training. A little less spectacular than with Edward, but also less hectic and with a nice length in his neck. It was a different way of riding him, but it didn’t seem a bad route to take at all.

Fast forward to Rotterdam. In the promovillage there is a shop with merchandising: clothes with labels ‘Totilas Champion 1’. It might have been better to wait until after some big victories, now people will perceive it as premature.

On Thursday I see the warmup of Totilas. Some walking and then a simple trot. I can’t believe my eyes. He is uneven, lame. I think he should be put back in his stall, but that doesn’t happen. Totilas has a moderate Grand Prix, uneven in the front leg.

While looking at the Grand Prix Special I can only think of all the things that went wrong here: not just the mistakes in the test, but they don’t seem to want to do it for each other. It seems as if they don’t like each other anymore.

Despite a public disagreement between Matthias and his father on Sunday morning, Totilas starts in the freestyle, with again a very moderate performance.

While waiting for the prize giving ceremony, we notice a small hole in the skin on his right side. It doesn’t bleed, but the skin is broken.

But for now, Totilas has become a tragic hero. So much potential, and such sadness. What a disaster for all involved. I so much hope everything will be good again.

© Horses.nl, this article is copyrighted.